A few months ago, we had one of the most incredible experiences getting to shoot a senior cat to commemorate the truly inspiring bond between him and his momma. We met Feisty in his home and got to observe and capture him in his own domain and comfort zone. This made for a super amazing cat photo session where image after image exuded gorgeous Feisty and beautiful raw emotion. Here’s a little on Feisty’s backstory.

In 2003, Feisty’s soon-to-be mom went to the pet store to buy cat food for her other cats. That day, a local shelter was holding adoptions at the store. Amongst a long line of cute kittens that were drawing the crowd’s attention was a full-grown cat sitting in the very last cage. That little guy was “Feisty”. Feisty was 4 years old then, slept in his litter box, and had scabs on either side of his head. When she first held Feisty in her arms, he shook like a leaf out of fear. But despite his initial trepidation, something deeper connected the pair. It was love at first sight and he was adopted right there and then!

Feisty didn’t have the smoothest of transitions to his new furever home. He hid for weeks. His mom soon learned that two families had already returned Feisty because he was thought to be “not social”. Turns out, like so many shelter animals who get passed on and on, Feisty was actually more shy than feisty! Thankfully, Feisty’s new momma was determined to stick it out with him and, good thing she did, because having Feisty in her life has been more than worth it. As we quickly learned during our shoot, Feisty is not shy anymore. Rather, he’s so very loving and wants to be near everyone. He loves to curl up next to his mom and get cuddles all day long. What was also so awesome to capture, was that – as his mom had told us – Feisty loves to look directly into your eyes and hold your gaze as though he is trying to send mental telepathy. The common reaction is: “I think he is trying to tell me something!” Not only did he often gaze lovingly into his mom’s eyes during the shoot, as you will see in the photos, he gazed directly into my camera lens & instantly connected with me. As any animal lover knows, that kind of connection is what we live for! 🙂 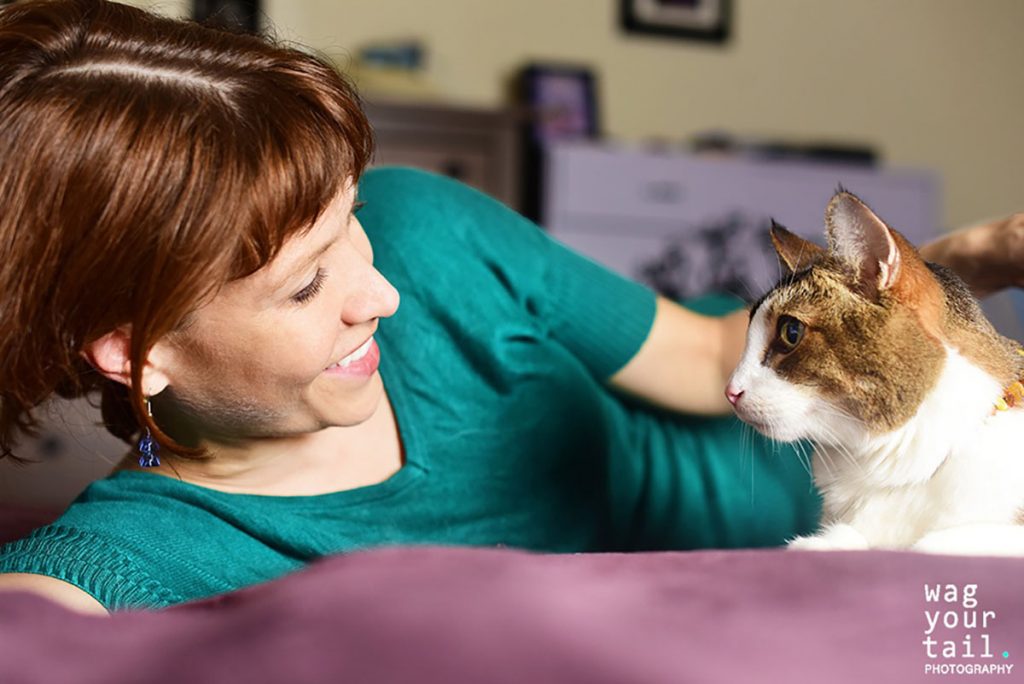 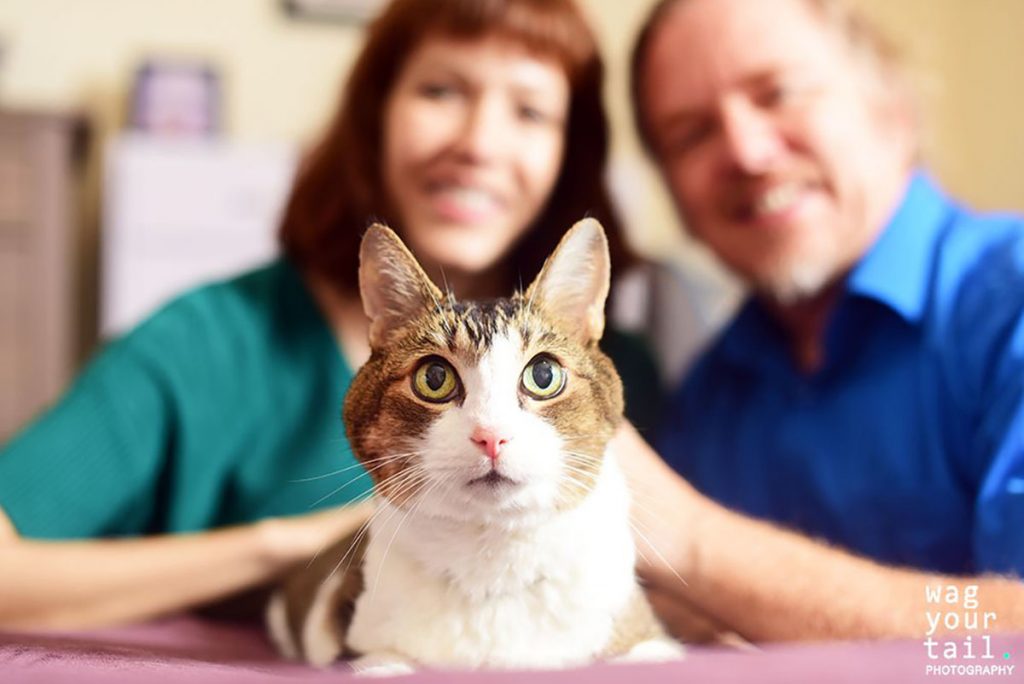 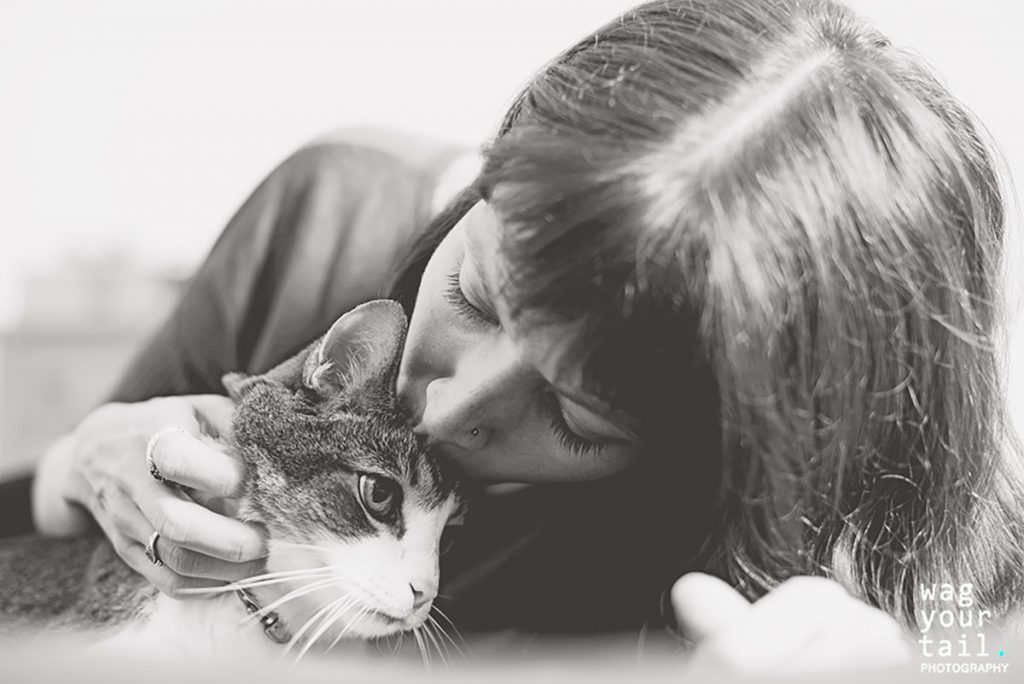 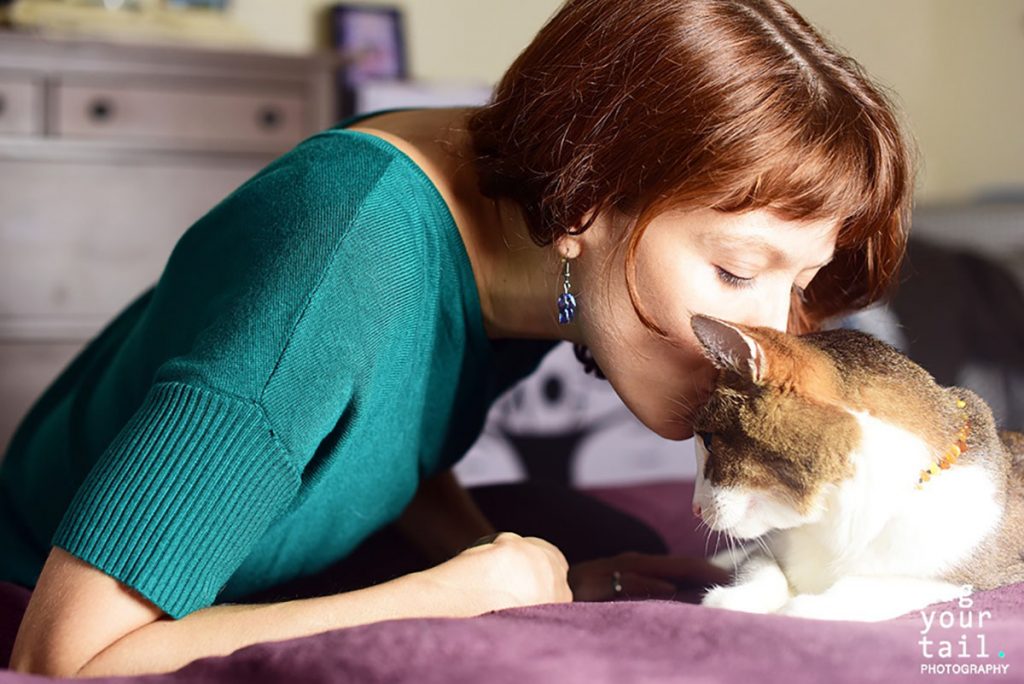 Amazingly, Feisty has dealt with, but managed to handle, many health struggles in his life…. Feisty has suffered from allergies, heart condition, near fatal kidney infection and even wounded his leg so badly that the vet thought it was going to have to be amputated. But, luckily with lots of tender loving care and the right treatment, Feisty’s leg healed and his allergies are well controlled.

Feisty has not only managed to overcome his own health issues, but he has helped his mom with hers. When circumstances led to a lot of alone time for her, Feisty was by his mom’s side the entire time! He was excellent company, purring and nudging her to cheer her up. He was also an inspiration to her. It seemed as though, he took his serious health issues in stride, faced them with such bravery, and remained a sweet and loving companion to be there for his momma. Throughout all of that, Feisty has inspired his mom to do the same for others. And we truly admire them both for that.

We honestly can’t think of a more enduring bond, having overcome so many hurdles. Their story proves that we should never ever give up on anyone or any animal and that love and companionship can truly heal. These two embody pure, unquestioning and unconditional love, and we are so honored that we got to capture their bond through our lens. We wish Feisty and his family all the very best for a wonderful future ahead! Here are some of our favorite images from Feisty’s session! 🙂 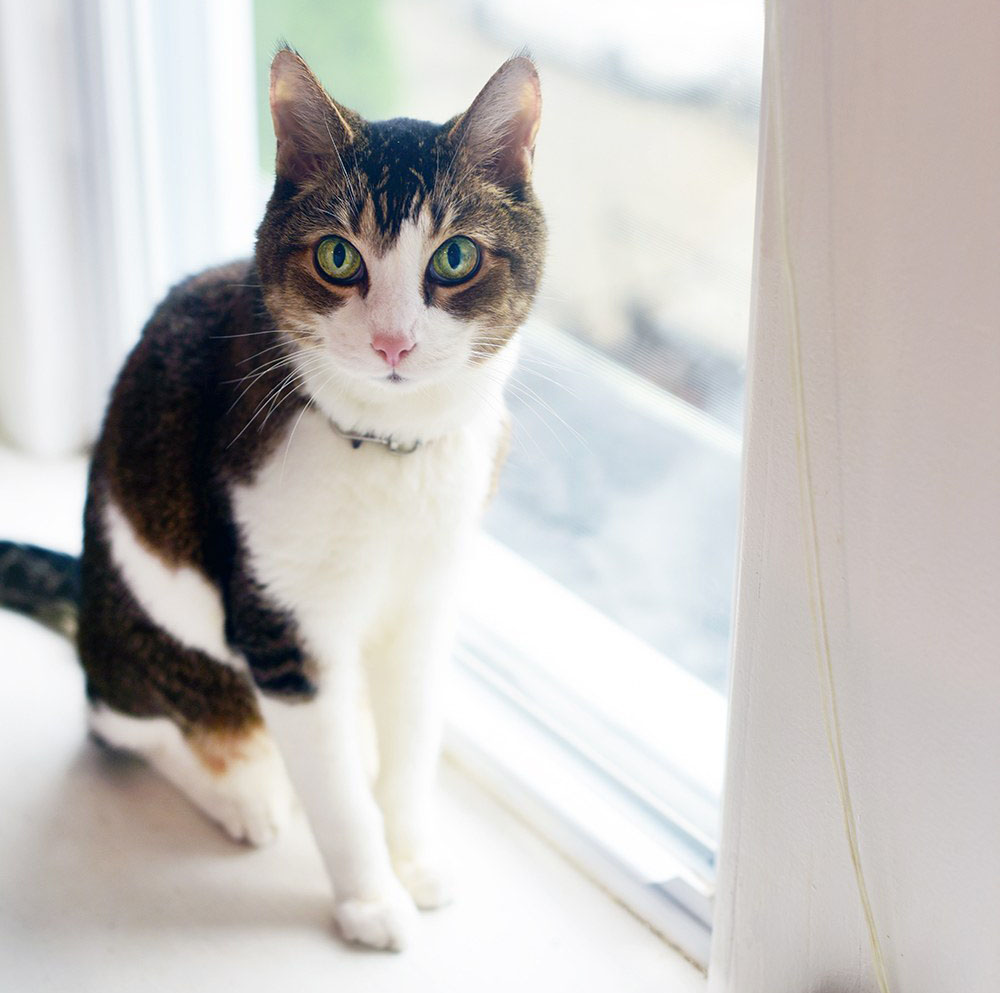 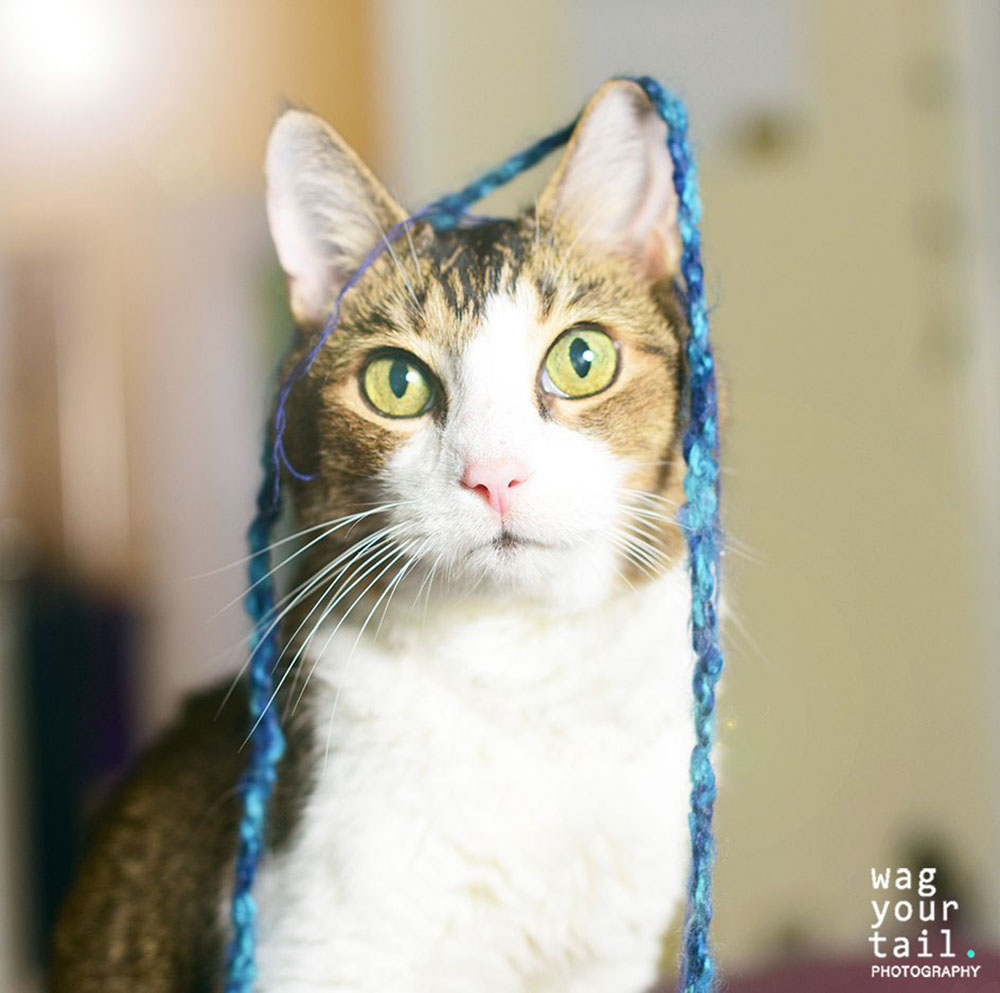 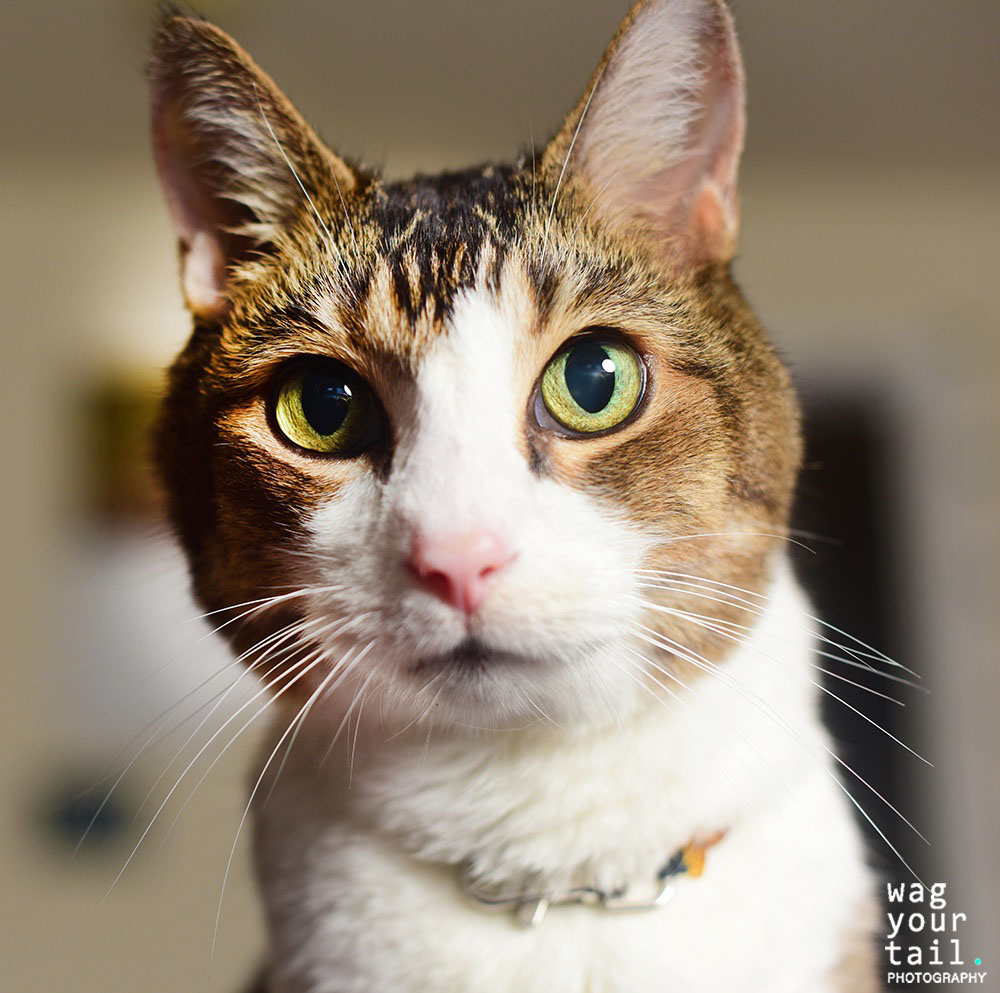